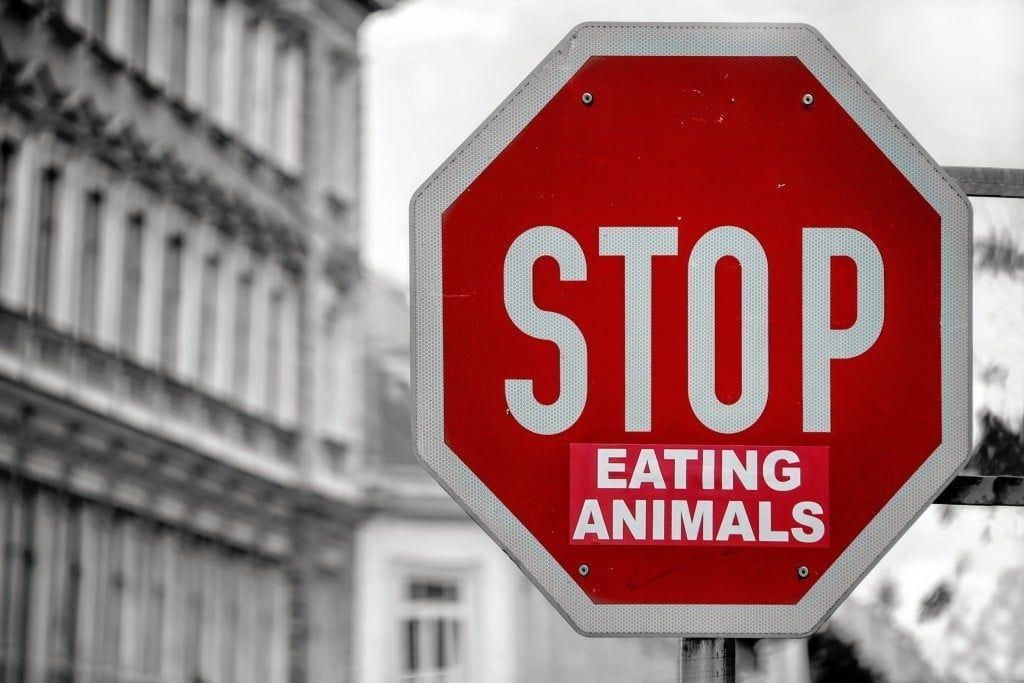 I appreciate I'm putting myself in the firing line for this one... But when it comes to Vegan protests, are we really doing ourselves any favours?

We always seem to be cropping up on peoples Facebook timelines. You can bet that if it isn't a vegan persons timeline that we're in, we're being portrayed negatively. There was one protest in particular that sticks in my mind. That's the protest outside of the Antler Restaurant. You can see the video below:

Now don't get me wrong, I certainly don't condone this fella's behaviour. Or that of the cops who showed up and did the sum total of nothing. However, I don't condone the protesting either.

Now, I don't like being referred to as a twat. Nor do I like the fact that people are eating meat, destroying the planet, and being completely ignorant of the situation at hand. So how do we strike the balance right?

We want to convert them

Let's take a look at this restaurant owner. Sure, it's a dick move carving a leg up in front of vegans but he is one of millions of steakhouse owners. One day he decides to set up a business, invests his time and money into it because there is a demand for what he's selling, he's lived a life ignorant to the suffering of animals and doesn't see what he is doing is wrong until one day... Vegans show up at his door, protesting.

Then because his business and lifestyle feels threatened, he reacts. In actual fact, it's drawn a lot of attention to his restaurant and he later reported that he's packed out (So that backfired) but on initial contact, it doesn't feel like a peaceful protest, it feels like a direct attack at his life, his business, his family, his everything. Why him? There was no sort of global plan here until it hit the news and I can tell you now, what they're saying isn't good for the most part!

For every action, there is an equal and opposite reaction

The meat eaters out there see this as a challenge, a fight, and they are totally up for that. Vegan Protests are just a battle cry to them. Vegans have always seemed like a bit of a joke. It undermines our message because they see us as aggressive, opinionated, extremists. It makes our job a whole lot more difficult when we are just perpetuating that stereotype. They are ignorant of the message because they think we're mental...

We need to get smart about it

You may argue that veganism has come a long way this year and you may attribute this to the hard work of protesters everywhere. I'm sure it has worked in some cases but I want to take a stab in the dark as to why we've seen a sudden growth.

Veganism is hitting the mainstream media. We've seen Cowspiracy take flight and with so many millennials watching Netflix, they are starting to make their own choices. I'm sure as more and more millennials leave home and are able to dictate their diet without pressure, this number will continue to increase.

We have also had a number of celebrities start opening up about their vegan diet. Will-I-Am, Zac Efron, Arsenal's Hector Bellerin. All of which see the health benefits of a vegan diet and choose to focus on that. Of course magazines are picking up on the trend and promoting it too.

So protests may have sparked this interest but let's face it, it was always up to the big names to propel it.

Now imagine if instead of vegan protests, we set up a small stall outside offering free samples of vegan food that you could try on the proviso that the person takes a leaflet. Free food! Free Vegan Food. That's something to talk about and it's promoting the best of us! Maybe instead of keep protesting, we should now look to more conventional methods of marketing. Sell the vegan lifestyle! People are already starting to get on board because they've heard about the wonderful health benefits in the Fabulous Magazine!

What if you want to go a step bolder? Compete fairly with this gentleman, set up a vegan restaurant opposite. Give people the choice of where to go for their food. Offer a vegan alternative that is actionable right from the get-go.

Everyone has their different reasons for becoming vegan. We would all love to believe that it's because we love animals and they feel too. That's a great reason! But truth is, not everyone will drop their current eating habits for that. People already know, they just choose to ignore.

For me, the turning point of myself going vegan was finding out just how much damage it's doing to the planet (You can find my blog on global warming here). For a lot of people, I imagine they will want to keep their health in check. We need to get more personal, find out what makes these people tick and find out how we can persuade them to change. Do they want to live a healthy lifestyle? Are they concerned about the planet? Do they love animals? What's stopping them? We have all the selling points to convert them and we know a vegan diet is win-win. We just have to help them to see it.

I'm even going to take up issue with the big guns when it comes to Vegan protests. The work they have done has been wonderful in promoting the vegan life and helping new vegans start out. I ordered their starter kit to get me going (You can find it here!). However, for the organisation that is fronting our movement, they themselves have fallen prey to the big vegan joke.

I don't know how many of you are South Park fans out there but that was not such a funny episode from our perspective. It's hard watching because the producers always try to make light of dark situations and topics, help people see the funny side of things but this episode wasn't that. It was an outright mockery of PETA. Nobody would then research into what PETA is actually about. They would just point and laugh.

The shock tactics they are employing over social media are horrendous. Without a doubt, it is making us vegans ever more so vegan. It's not reaching non-vegans though. We'll share it amongst our groups and go "Hey! Look how wrong this is" and we'll all get riled up whereas the non-vegan will scroll... They won't pay it any attention. Some will... Most won't.

Even then, the some that will, might watch the video, go "Oh that's awful!" and then head straight downstairs for their meaty dinner. The message doesn't resonate. It's impersonal.

So are our vegan protests really doing anything but perpetuating our angry stereotype?

What is it then, that we should do?

The sad reality is that this only, really, has an impact with vegans. If a person wants to remain ignorant, they will. You can't change that and if we try to, they will only get more defensive and harder to convert.

We have lots of recipes to hand that can fool meat eaters. Why not share these? Put work into putting plates in front of people. Let them see the benefits as opposed to the negatives. Most people eat meat every single day. What if we actually focused on making #MeatFreeMonday work? I know it's not ideal but if everyone skipped one day a week of eating meat, that's a lot of lives saved for a start. I challenge everyone reading this post to tweet their favourite vegan recipe. Let's try and filter out the negative messages with the positive. I wonder what this will actually do for engagement... If you do, make sure to tag us in it! @AmyHer_Bivore

It's time for a change, we should start by getting creative and share what a positive vegan lifestyle is all about, as opposed to expending all our energy on vegan protests.